I’ve come to the conclusion that creativity is really all about learning how to edit and, unfortunately, that particular skill eludes me at the current moment. I can come up with hundreds of ideas for a story, but the story quickly becomes a narrative mess because I have such a difficult time cutting out unneeded elements and selecting the right pieces to tell the tale in my head.

I think part of the issue is that every story I’ve ever dreamed up has at least two versions—sometimes many, many more—and I want to tell them all. But since the story deals with the same characters, this isn’t always possible since some storylines may not be compatible with each other. Other times, the different versions create characters with personalities and motivations that stray too far from my original ideas about them.

I am finding, though, that if I start out with a specific idea of what I want to create, then it becomes infinitely easier to discard the things that don’t fit. Case in point, when I first started working on Tower of Menda, I had the idea of making multiple endings where your choices during the game would lead to either the true ending or the bad ending. I thought it would be interesting for the player to have a hand in how the character turned out.

However, I ultimately decided not to go that route. Multiple endings require quite a bit of thought and organization. The interaction with other characters and game environment must be written in such a way that they can be interpreted differently depending on the context of the ending. I would also need to write some scenes and interactions that would only occur based on which ending you were headed towards.

Imma be honest and say that was more work than I wanted to put into this game’s storyline. Because of my aforementioned problem, I want to keep things as simple as possible so the game doesn’t get stuck in development hell. When I saw how much complexity was involved in implementing a satisfying dual ending, I abandoned the idea.

At first I was bummed, but then I realized the second ending I had in mind didn’t really fit the game’s theme, character’s nature, or in-game universe. So now I’m just going to focus on making the storyline I did settle on as interesting as possible.

I’ve completed 95 percent of the mapping for the first dungeon and have begun implementing the puzzles. For this first dungeon, I decided to base the puzzles on verbal arithmetic. This is a game where you have to figure out the numerical solution of a math problem that only contains letters. Here’s the Wikipedia article about it. The Tower customizes itself according to the person that enters it. Since Annani is book smart and one of the top students at her school, I thought this type of puzzle would best fit her and provide a challenge to the player. Of course, there will be hints.

Here are some screenshots of the dungeon and puzzles. 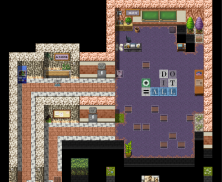 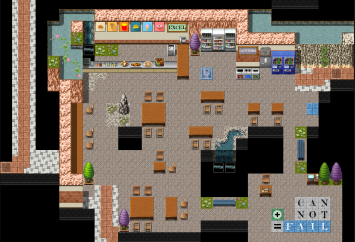 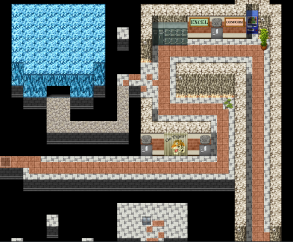 Lately, I’ve been concentrating on developing the level up parameters, which is hella harder than it seems it would be. My trouble is balancing the gain with the amount of experience points it takes to level up. For instance, it’s easy to level up at the beginning of the game because the amount of experience you need is low. So the amount of HP, ATK, DEF, etc should also be low. However, higher levels cost tens of thousands of experience points, so the gains should also be substantial enough to justify the effort. At least, that’s my reasoning. Trying to find that balance, though, is proving to be somewhat challenging.

(I know I said previously that I was going to implement an AP system, but I decided to stick with the traditional leveling system for simplicity’s sake.)

Another thing I decided on is this is a single-character game. It’s just you against the monsters. There will be battle companions that provide support in various non-attacking ways, though you won’t be able to control them.

I’ve also worked out two of the three character classes you can choose from and am fleshing out the third. Once I get the specifics for that one, I’ll do a blog post on them.

Anyway, until next time.

One thought on “#TowOM: Adventures in Dungeon-Building and Story Editing”