I have no idea how to run a game developer’s blog. The stuff I’m working on right now is not sexy enough to show off, so I’m not sure what—if anything—I should write about. At the moment, I’m programming the puzzles for #TowOM’s first dungeon, developing enemy stats, and putting together tilesets for other level maps; so not a lot to see.

I did start redoing the map for the inn. I posted a preview of it on Twitter last week for #ScreenshotSaturday. 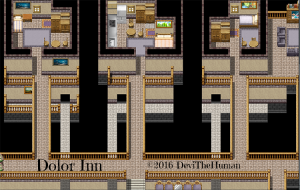 As I explained on Twitter, the player will have a choice of two types of rooms: a regular one or one with a kitchen. I’m implementing a cooking mechanic where players can make recovery items and stat boosters, but you must have access to a kitchen to do it. The kitchen room will be more expensive, but making the items will save the player money in the long run. However, they can still purchase ready-made recovery items in the marketplace and all the ingredients can be used in their own right for HP/Magic restoration.

I am toying with the idea of adding a quest where the player can earn a house as a reward. Not only will they be able to recover for free, but it’ll give them the option to make and sell recovery items to NPCs for money. I’m not 100% sure how I will implement this mechanic, so I’m still brooding over it.

Outside of remaking one world map in MV, I haven’t done any work on Keloryn: The Darkening. I’ve been brooding over the game this whole time. I mentioned in a previous post that I’d planned on porting the game to RPGMaker MV, because the program has a lot built-in functionality plus a ton of add-on scripts that make it ideal for implementing the ideas I had for the game.

The problem is, MV is still fairly new, which means there aren’t nearly as many graphical assets for it as there are for RPGMaker VX/ACE. And while I like the assets that are available for MV, after studying the maps I have made for KTD, I find I prefer to use the VX/ACE assets I selected for the game.

At first I thought I would just resize the graphics, but the quality of the resized stuff is not the same. After a couple of weeks of thinking about it, I finally came up with a solution. There is a script by Shaz that lets MV use VX/ACE-sized tiles without messing things up. I decided I will continue mapping KTD in VX/ACE and then port the maps to MV so I can use the program’s scripts and functionality.

I realize I can actually use Shaz’s script now and map the game entirely in MV. However, the script only changes the tiles in the game. The mapping window still uses the 48×48 MV tile size. I would have to resize the VX/ACE tiles so I can see what I’m putting down and then put the real tiles in a separate folder so the game knows which graphics to use. You can see what I’m talking about in the video about the plugin.

I’m an on-the-fly mapper, which means I usually have Photoshop open so I can customize tilesets as I’m mapping. It would just be a nightmare chain of changing, resizing, and updating if I tried to map KTD in MV and aint nobody got time for that.

Anyway, with that decision out of the way, work on KTD will resume. As with #TowOM, I’ll post updates about the game on Twitter, albeit under a different hashtag. The hashtag I was using (#KTD) is being used for something else, so you can follow #KelRPG from now on.

Last thing: There was an incident of art theft that occurred on the official RPGMaker website. If you used any of the tilesets or graphics created by Kaus, aka Hanzo Kimura, STOP immediately and check out this thread.

Stay safe out there.