A few months ago, Kadakowa came out with a new game engine called RPGMaker MV. After reading up about it and looking at some videos, I decided to port my original project Keloryn: The Darkening (KTD) to it because it has most of the features I needed to make the game how I want without having to make a bunch of custom scripts. For instance, MV has sideview battling built in, whereas I would need to install a custom battle script to get the same thing with VX/Ace.

Since the porting process for KTD is going to take awhile (and has already run into a major hiccup), I decided to start a smaller project called the Tower of Menda (TowOM). The reason is purely psychological. I feel like completing one project will give me the confidence and impetus to continue working on my long-term project KTD.

Anyway, it’s been awhile since I’ve blogged, which means my transition game is a little rusty. So…Imma just jump right into it.

High school senior Annani Muse literally falls out of the sky into a strange city. Unsure of how she got there, she learns the only way out of town is through the Tower of Menda. But the tower is unlike anything she’s ever encountered before. It’s a seven-level maze filled with creatures and monsters that seemed pulled straight out of a horror movie and puzzles that serve no other purpose except to be annoying.

Armed with only the contents of her backpack and a rudimentary knowledge of RPG battling, Annani must forge her way to the top where freedom awaits. Or does it?

TowOM is essentially a dungeon crawler. I plan to set it up so you can actually complete the tower without doing any side quests and with minimal interaction with the people in the town. However, you’ll have a much richer experience if you interact with people and do the side quests, because you’ll learn more about the city and its people and earn items, gear, and secrets that will make getting through the tower much, much easier.

I’m not planning on doing anything fancy with the battle system because, like I said, I want to keep things as simple as possible. As of right now, it’ll just be the basic turn-based battling with standard skills that you learn along the way.

However, you will get to choose between at least three different classes: swordswoman, sorceress, or archer. I’m also toying with implementing an AP-type system that lets you upgrade/customize your character’s stats using points. I’ve always liked this type of system because it lets you create a character that conforms to how you play. For instance, I like one-shot kills. So whenever I can customize my character’s stats, I always maximize their attack power so I can destroy as many enemies as possible during the first round.

As of right now, you will be playing solo. I haven’t decided yet if you will be able to recruit people from town to help you clear levels not. I’m still working on the story, so I’ll see how that fits into the narrative.

I’m almost finished with the introductory area of the town (the City of Dolor). I still have the tavern to do and I need to clean up the church. Some areas still need to be…massaged…into what’s become the game’s signature style, and all the areas need finishing touches like pictures, knickknacks etc. I’m finding my mapping process is a lot like how I write. I do a general draft, edit it to how I want it to look, and then add the minor stuff at the end.

Anyway, here are the maps I’ve already posted to Twitter: 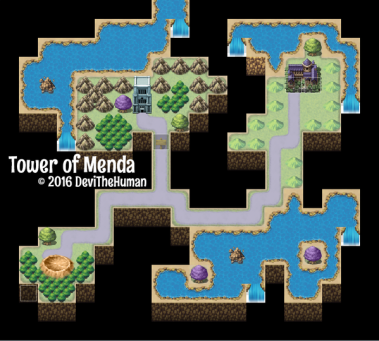 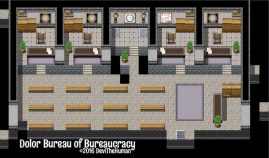 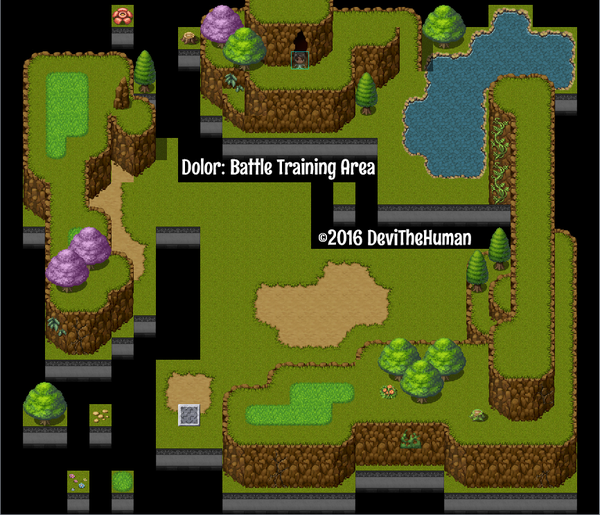 Here are a couple of new maps: 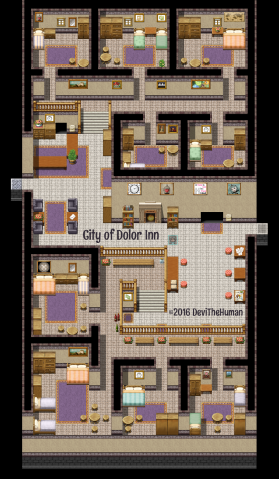 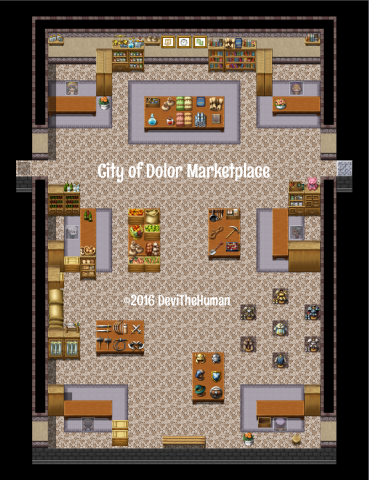 I’m going for a surrealistic atmosphere with a focus on decoherence. I want the place to look like it’s being held together by a thread and will break apart if someone sneezes wrong. And yes, the maps’ theme does fit in with the plot of the story.

Anyway, I’m not as organized as I like to pretend to be, so I’m not sure when the next time I’ll update. With most of the mapping done for the starter level, I’m more focused on getting the story worked out so I can start filling in the database and, by extension, working on the tower levels. Imma shoot for a posting next week, but…um…we’ll see.

I’m always on Twitter, which means you’re more likely to see updates about Tower of Menda there first. So follow #TowOM  on Twitter for the latest stuff.